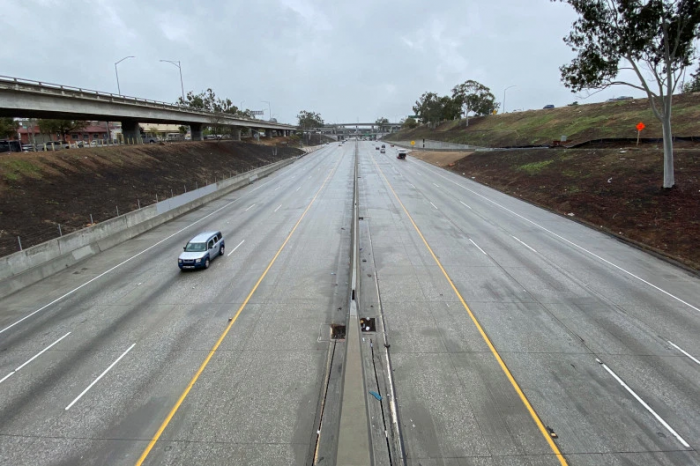 Contractors said they are working during the day instead of at night, extending work hours and closing longer stretches of road at a time under temporary agreements with the state Department of Transportation and local agencies.

"There's recognition that we can get more done with less traffic for sure, and that's happening," said Ed Herrnberger , an executive vice president at Teichert, a Sacramento -based construction company. "I'd say that's consistent industrywide."

Traffic is down 36 percent on average in urban areas across the state, said Matt Rocco , a Caltrans spokesman.

Teichert is working on truck scales near Citrus Heights , a project that normally would back up traffic on U.S. Interstate 80 .

The company was going to have to wait to start the project until it got warm enough outside to pave at night, but was able to start earlier in the season by working during the day, Herrnberger said. Now the project is on track to be finished weeks ahead of schedule, likely next week, he said.

A major project to add a lane to Interstate 5 south of Sacramento is shifting from night to day work, Herrnberger said.

Similar changes to projects around the state "hopefully will get road improvements done quicker and save taxpayer dollars," said Russell Snyder , executive director of the California Asphalt Pavement Association .

Caltrans launched a wave of new road construction projects after the state passed a new gas tax to fund the improvements in 2017. The 12-cent -per-gallon increase was expected to raise $5.4 billion per year in new money.

At this point, it's too soon to say how the stay-at-home directives that have Californians using less gas will affect future road improvement budgets.

Rocco, the Caltrans spokesman, said the department is "monitoring traffic reductions and any updates or changes to revenue estimates" will be reflected in the revised state budget proposal Gov. Gavin Newsom is expected to release in May.

The company is moving workers from projects in confined spaces, such as buildings and below ground, to the open-air road projects, he said.

"We're moving them from south to north to east to west to keep them busy," he said.

The company is booking hotel rooms for each worker instead of putting them two-to-a-room, he said, and isn't requiring people to come to work if they have chronic health conditions or are concerned for their safety.

In Desert Cities, a roundabout project will be finished five weeks ahead of schedule due to work schedule changes, he said.

"At the end of the day, hopefully these projects will get done quicker with less impact on the public in total," Radich said.

Changes to more projects likely are in the works, Radich said.

Under agreements with Caltrans and local governments, the projects will return to normal schedules when traffic returns to normal levels.

While some projects are moving forward under altered schedules, others have been put on hold due to the coronavirus, Rocco said.

Those include a $46 million project to rehabilitate pavement and upgrade curb ramps to American with Disabilities Act standards on State Route 99 from Galt to Simmerhorn Road crossing in Sacramento County .