An incumbent in this class exercises independent judgment and discretion in establishing work plans and priorities; to accomplish the Engineering Division's goals and objectives; responsible for ensuring activities are consistent with City policy.

Applications must be completed and submitted online. This recruitment will remain open until filled and may close without prior notice, therefore prompt application is encouraged.
First application review date is Thursday, November 7, 2019.

Applications must be completed and submitted on-line by the specified deadline . Candidates are requested to provide specific information regarding their education and experience as it relates to the position by completing all fields of the application. Applications may be rejected if incomplete . Do not include "see attached resume" in your responses, as they will not be accepted or reviewed in the application process.

Based upon the information presented on the application, a limited number of candidates who possess qualifications most pertinent to the position will be invited to participate in the selection process. The selection process may include, but is not limited to the following components: application review and evaluation, written examination or exercise, physical examination, practical exercise and interview evaluation. Please notify the Human Resources Division 72 hours in advance of the test date if you have a disability which requires accommodation for the testing process. The eligibility list will be in effect for one (1) year, unless exhausted sooner. The eligibility list established from this recruitment may be utilized to fill lower-level vacancies which occur during the life of the list.

All employment offers made by the City are contingent upon establishing proof of a prospective candidate's legal authorization to work in the United States and successfully passing all components of the pre-employment process which may include, but is not limited to: comprehensive background check, criminal history check (livescan fingerprint check), polygraph examination, post-offer psychological evaluation and post-offer medical evaluation (may include drug screen). Based upon current and/or future assignments, an employee may be subject to pre-employment, random, reasonable and post-accident drug and alcohol testing pursuant to the Department of Transportation Regulations.

Note: The provisions of this job bulletin do not constitute an expressed or implied contract. Any provisions contained within may be modified or revoked without notice.
Closing Date/Time: Continuous

We will consider candidates that require VISA transfer/sponsorship for this position. 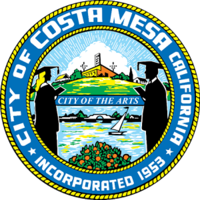 The City of Costa Mesa— just one mile from the Pacific Coast in the heart of Orange County—is one of California’s most eclectic and vibrant cities. The city is home to South Coast Plaza, one of the nation’s largest shopping centers, and the world-class Segerstrom Center for the Arts and South Coast Repertory theater. Costa Mesa is also the capital of the action sports industry and the headquarters for companies such as Hurley International, Volcom, RVCA, Rip Curl, and Vans. Costa Mesa’s official slogan is the City of the Arts and that creative bent has given rise to The Lab and The Camp, two counter-culture retail developments, and the SoCo Collection, a cutting edge, environmentally friendly shopping center. The city’s diverse dining scene has earned Costa Mesa the award from Rand/McNally and USA Today as being the best small town for restaurants west of the Mississippi River, and in a recent Orange County Register review of the Top 75 Restaurants in the county, Costa Mesa restaurants occupied the top five. Costa Mesa encompasses 16 square miles and has a population of about 113,000. Since its incorporation in 1953, Costa Mesa has evolved from a semi-rural farming community of 15,000 to a city with robust local economy that generates tax revenues of about $100 million annually. A general law city, Costa Mesa has a council-manager form of government and staff of approximately 450 full-time employees. The 9.5-acre Costa Mesa Civic Center at 77 Fair Drive. City Hall is a five-story, mid-century modern building. The complex also includes the Council Chambers, Police Department headquarters, a 911 telecommunications center and Fire Station No. 5. For more information, visit www.costamesaca.gov and follow us on social media: Facebook - @CostaMesaCityHall Instagram - @cityofcostamesa Twitter - @CityofCostaMesa Costa Mesa Connected news blog – Cityofcostamesanews.com